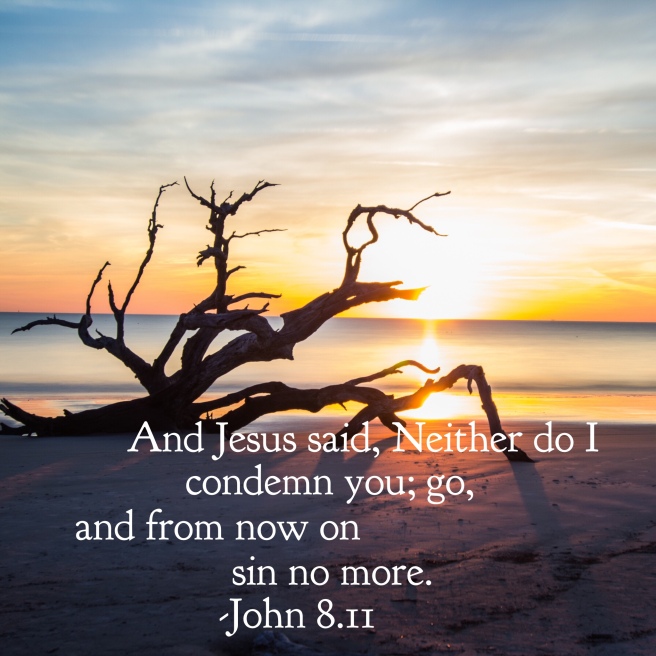 Thanks for stopping by. This is a repost from a series I wrote at Messy Life Praying Wife.

Today, we are looking into the dramatic story of the woman caught in adultery. What does this story hold for us? Even if we’re not committing adultery, what can we glean from this passage of scripture?

The religious leaders were trying to trap Jesus and trick Him into breaking the Law. In the synagogue, where Jesus was teaching the crowd, the Pharisees brought before Him the woman caught in sin. They made her stand before Him…before everyone, exposed for all to see.

“In the Law, Moses commanded us to stone such women. Now what do you say?” They were using this question as a trap, in order to have a basis for accusing him. 5-6

In their zeal to trap and ensnare Christ, these leaders exposed the sin of another with no regard to their own. With their jealous, misguided fury against the Lord, they pretended to inquire of His judgment, but really they were accusing and judging Him.

In His silence, Jesus allowed their questions to hang in the air…unanswered, perhaps exposing more than they realized.

But Jesus bent down and started to write on the ground with his finger.  When they kept on questioning him, he straightened up and said to them, “Let any one of you who is without sin be the first to throw a stone at her.” Again he stooped down and wrote on the ground. 6-8

Jesus is always more interested in the dignity of the person than the judgment of the sin. After all, mercy triumphs over judgment (James 2:13). Jesus, as Divine judge, was more concerned with repentance than punishment.

Jesus straightened up and asked her, “Woman, where are they? Has no one condemned you?”

“Then neither do I condemn you,” Jesus declared. “Go now and leave your life of sin.”10-11

We discover through this story, that we can often classify the sinner with their sin, leaving little to no room for freedom, but Jesus came to cover, protect, and liberate those stuck in sin. He came to set the captives free. The woman caught in adultery was held captive by her accusers until Jesus, in His quiet and profound way, turned what was meant for evil to good, and into something beautiful: redemption and salvation.

As men and women of the word, let’s be merciful, caring for the dignity of the other person. Let’s be more concerned with our own sin before being willing to expose that of someone else. Like Christ, let’s bend down and offer grace and truth to those who need it.